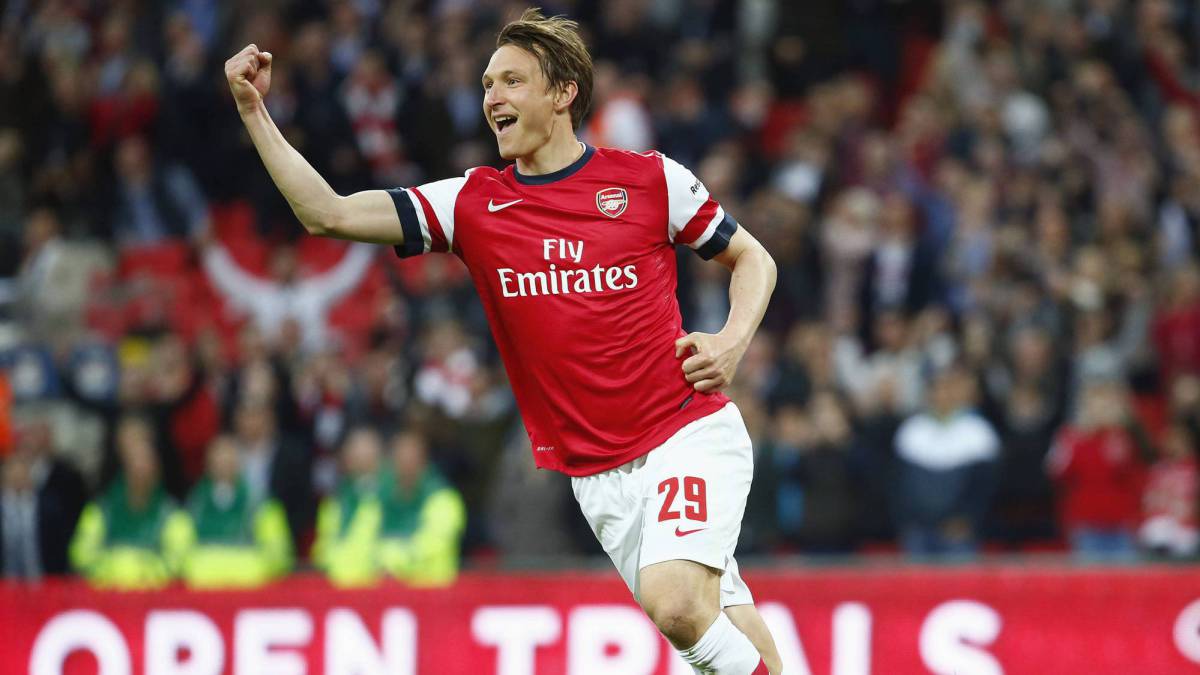 Hey, remember me? It’s Kim Kallstrom but you might know me as the guy with the broken back.

It’s OK, I can laugh about it now! Because my time at Arsenal was very special for me and even though it was very short, I see it as a couple of months of great fun.

It’s a time that really made my career a little better, a little funnier and it’s given me some great stories to tell. I met some great people, worked for a great coach and got to play for an incredible club.

So let’s start this story with how it all began, and when I found out I was signing for Arsenal. Mathieu Flamini was suspended for a couple of games I think, there were some injuries as well, and I was in Abu Dhabi with my Spartak Moscow team-mates. I was on a bus on the way to a stadium for a training game, and my agent called me.

"Do you want to go on loan to the Premier League?"

"No, not really," I said. "It would be fun to play in the Premier League, but I'm not so interested in the loan."

I have a family and at the time, everyone was settled in Moscow. We were very happy there and loved living in Russia.

"Yeah, I'm sure. I'm going to stay until the summer and then we'll see what happens."

Then, about 10 minutes later, he calls me again.

"Kim, are you sure you don't want to go? They're really eager to sign you on loan."

Then, one hour later he phones back again - and I was starting to get a bit annoyed!

There were a couple of clubs in the Premier League that could have been in for me and I didn't think it was going to be a top club like Arsenal.

I changed my mind there and then, called my wife, told her we're going to live in London for a couple of months and then that was that. For us, it was an experience and we knew we weren't going to stay there, so we just made the best out of the couple of months to enjoy the city and the club.

Because we were on a training camp in Abu Dhabi, I only had one suitcase. We were supposed to fly back to Moscow the day after I think. It wasn't really clear whether I was going or not, the transfer window was closing and of course there's the time difference, too.

I hopped on a plane just after midnight, didn't even say goodbye to my team-mates because they were all sleeping. It happened really, really quickly after that - well, once I'd got through the medical!

Lots of people think they know about this injury but let me explain it properly. We were training on the beach - this is so embarrassing - and it was a proper training session too, not just one for fun. I say it was a beach, it was more like concrete. Anyway, we had a game there and I fell badly on a small rock.

I hit my back and had some pain. Obviously we were due to go back to Moscow the day after so we didn't do any medical check-up there because it wasn't too bad at the time. We informed Arsenal straight away that I had a problem with my back and that I had no idea what it was, so they just told me to come along anyway.

It was a bit of a blur because the deal had to be done quickly. I came to London, we had the medical and we found out there were some problems but we arranged the deal anyway. I thought the transfer would've been off because I was injured but we worked out a deal between the clubs that said I could stay.

It was really the last few minutes of the transfer window so either they signed me with a bad back, or they didn't sign anyone because there wasn't any time left. That's why they took a chance on me and in the end it worked out quite well.

I had signed for a few teams in my career but it was definitely a different approach going into the dressing room as a January loan signing. Everyone there knew I was only there as a back-up option because they were lacking bodies so to speak. Outside of football, you don't have a permanent residence, I just treated it like an adventure.

There were a lot of French players there and obviously the boss, lots of people around the club who could speak French too. I speak French because of my time at Lyon so that helped. I'd made my name in France, so that made it easier because they recognised me - and Nicklas Bendtner was there so I could speak Swedish and Danish with him. It made it a bit easier to adapt fast.

There were also a couple of players who were injured at the same time as me. Aaron Ramsey was one of them. In one way it was good to have that experience with an injury because you're at the training ground a lot more and you meet all the people around the club. When the players left, I stayed after training to make sure I had a good rehab.

I was surrounded by Santi Cazorla, Mesut Ozil, these guys who were so skilful. It was nice to see them every day at work. People are so professional. I played alongside Zlatan Ibrahimovic for a long time and he's a real pro, but then I came here and I saw how professional Mikel Arteta is... wow. He is so committed to the game and so engaged with it as well, I learned a lot just from watching him.

Like I said, I was always there late in the afternoon because I'd made my career out of working hard. I'm a product of hard work and I would always stay after everyone else, so sometimes the boss would come in and we'd speak about French football. That was a nice experience.

I look back on those moments fondly because when I reflect on it now, I never really felt like an Arsenal player. I remember the FA Cup celebrations and feeling like a real outsider looking inside. I was a part of it, sure, but not really.

That semi-final... I'd been in the squad for almost all the games before, so I expected to be in the squad because of injuries. When you're in the squad, anything can happen, and then the boss put me on late into extra-time.

I actually had a half-chance when Giroud gave me a nice little flick and I had a shot which was either wide or over - either way, it went far and I'm not even sure the ball's landed yet!

Obviously the game goes to penalties so in the huddle at the end of extra-time, the boss comes over and talks to me in French.

"Do you take penalties?"

At the time, I didn't know how significant that game was because for me, Arsenal was a club that collected trophies all the time. I had the Invincibles and the Freddie Ljungberg era in my head, so I didn't understand that there had been so much time since the last trophy. The pressure to win one was very big, so obviously all the coaches felt that but I had no knowledge of it at the time.

I was just in the right place at the right time because I think they missed their first or second penalty and it's much easier to take one after your opponent misses. But what I'll always remember is walking up to that ball from the halfway line.

"This is strange," I was thinking to myself. "This is so weird!"

People always ask me why I was smiling on the walk - apparently nobody smiles when they take that walk - but you have to understand, I was not meant to take that penalty for Arsenal at Wembley Stadium.

That penalty changed the experience for me massively. I came here, was injured and didn't play a lot. Sure, that's part of the game, but then when you score the penalty at least you've participated in some way. It was an important trophy for the club, so it was great fun for me.

I'd say in terms of career highlights, that penalty is right up there. Mostly because of the size of the club, but also because it was such a weird moment. It's so different from all the others where I've won a title or won the championship in France because you fight for 11 months to lift the trophy.

Here, I walked in, hit the penalty, we won a trophy and then I walked out again.

Who'd have thought it, the guy with the broken back?